Dornbirn, Austria – For the Zumtobel Group, the 2015/16 financial year was characterised by fundamental strategic reorientation and restructuring. As the technology shift progresses, the Management Board is aiming to align the Group with new and innovative business models. In total, the lighting group generated the highest revenues in its history. Group EBIT, however, was still below expectations in the reporting year.

“It takes a massive effort to transform what was previously a metalworking company into an innovative, software-oriented service provider. In the course of the past year we successfully merged our sales organisations and now increasingly offer our customers multi-brand solutions. We are engaged in exciting pilot projects involving new services and connected lighting soultions. At the same time we had to acknowledge that restructuring our production operations would take longer than originally planned and as a result we did not meet our ambitious targets in the reporting year. We are, however, convinced that our chosen course is the right one and we will be continuing along it with full commitment,” said Zumtobel Group CEO Ulrich Schumacher, summing up the past financial year.

Highest revenues in the Group’s history
Following on from record revenues in the previous year, further 3.3% growth took revenues to EUR 1,356.5 million (2014/15: EUR 1,312.6 million). The main growth driver was once again innovative and energy-efficient LED technology: At EUR 860.3 million, the LED share of Group revenues rose from 49.8% in 2014/15 to 63.4%.
Prestigious projects around the world document the innovative power of the Zumtobel Group and its brands. By way of example, Zumtobel provided lighting solutions for the newly opened St. Martin Tower office complex in Frankfurt am Main, Germany; for a luxury shopping mall with its own art gallery in Lebanon; a new BMW plant in Hungary; and the Polish National Museum in Warsaw. In Copenhagen, the Thorn brand installed 10,000 smart street lights that automatically adapt lighting levels to traffic density, and in France Thorn delivered lighting solutions for three of the stadiums that are currently hosting the European football championships.

Growth in both segments, major differences between regions
A breakdown by segment and region reveals marked differences in revenue development: In the Lighting Segment, with the Thorn, Zumtobel, acdc and Reiss brands, in 2015/16 the Group passed the one billion euro mark for the first time with a 3.9% increase in revenues to EUR 1,028.4 million. Business developed particularly well in the Benelux countries, Eastern Europe and Germany. This was offset, however, by ongoing market weakness in France, Australia and the Middle East. Towards the end of the year, the business environment in the UK, the Group’s biggest market, and in Switzerland also deteriorated. Developments in the Components Segment (Tridonic brand) were similar, with a 4.2% increase in revenues to EUR 410.4 million.

Substantial increase in investments in R&D
With the aim of further expanding the Group’s technology position, research & development (R&D) expenditures were increased by a substantial 11.2% to EUR 87.9 million in the reporting year. Advances in LED technology mean that in future smart luminaires will also help provide Internet-based data services. Accordingly, one key focus of R&D activity was on the fields of system architecture, software development and data management. In all, the Zumtobel Group applied for 148 patents.
One milestone event in the reporting year was the international light+building fair in Frankfurt am Main: The Zumtobel brand presented a new outdoor portfolio featuring Supersystem Outdoor and Nightsight, as well as the sixth generation of the successful office luminaire Mellow Light. Thorn chose to focus on modern, energy-efficient office luminaires, showcasing IQ Wave and Omega LED, and presented Altis Sport, the first LED floodlight with HDTV capability. For Tridonic the unveiling of Net4More marked the brand’s entry into a new age. With Net4More, the components brand is offering an open platform comprising LED components, sensors and software tools as the basis for connected lighting solutions.

Acquisition of acdc and new technology partnership
Further strategic milestones in the reporting year included the acquisition of the UK-based LED specialist acdc in the autumn of 2015 and a development partnership with Bosch concluded in the spring of 2016. With acdc the Zumtobel Group has added an innovative specialist in architectural facade and hospitality lighting to its brand portfolio. The partnership with Bosch Software Innovations aims to develop smart lighting solutions for connected buildings. An initial joint pilot project was realised for the Rhomberg Group’s LCT ONE Tower in Dornbirn.

Delays in forecast realisation of cost savings from plant restructuring
On the production side, the Zumtobel Group again drove forward the measures introduced in previous years to improve capacity utilisation and competitiveness. By way of example, costs were cut at the Lemgo plant in Germany, capacity uptake and on-time delivery saw a marked improvement at the Spennymoor plant in England, while in Dornbirn LED production was automated and the finished goods store outsourced to an external logistics company. Owing to delays in the implementation of the restructuring measures, however, the planned cost savings have not yet been realised in full.

Headcount totals 6,761 full-time equivalents
On 30 April 2016, the Zumtobel Group had 6,761 full-time employees worldwide (including contract workers, not including apprentices). This equates to a year-on-year decline of 473 employees (minus 6.5%), mainly from the production and sales sectors. In the R&D and administration sectors there was a slight increase in the headcount. Following a reduction in the number of contract workers, the headcount in Austria fell by 1.9% year-on-year to a total of 2,311 full-time equivalents, with a 1.5% decline at the Vorarlberg site to 2,030 employees. On the balance sheet date, the Zumtobel Group was training 120 apprentices worldwide.

Recommended dividend of EUR 0.20 per share
Owing to increased R&D expenditures, the delays in plant restructuring, pressure on prices and negative currency effects, adjusted EBIT for the Group was 11.7% down on the previous year at EUR 58.7 million. The return on sales thus fell from 5.1% to 4.3%. Despite higher negative special effects and thanks to an improvement in financial results, the Zumtobel Group was able to post net profits at the previous year’s level of EUR 11.9 million. Another positive factor was the development of free cash flow, which moved ahead from minus EUR 15.2 million in the previous year to plus EUR 49.8 million. Against this backdrop, the Management Board and the Supervisory Board will recommend distribution of a dividend of EUR 0.20 per share (2014/15: EUR 0.22).

Outlook: Developments in 2016/17 marked by above-average uncertainty
In the current 2016/17 financial year, the Management Board will continue the strategic reorientation of the Group and the implementation of the necessary restructuring measures with full commitment and determination. In addition, in the current financial year the Zumtobel Group will continue to make targeted investments in the expansion of its expertise and capacity in the areas of smart controls and data management, the service business and other innovative business models
The business environment is marked by high volatility and thus by above-average uncertainty. In the European construction industry, for example, the trend towards modest market growth has become more settled, although with substantial regional differences. The UK in particular – the most important market for the Zumtobel Group – has recently experienced growing uncertainty. The Management Board is assuming that the business environment in Australia, the Middle East, France and Switzerland will remain difficult, while Germany, the USA and Eastern Europe should continue to generate further sound growth. Given the high level of uncertainty on the planning front, no concrete forecasts for the development of revenues and earnings in the 2016/17 financial year are being issued. 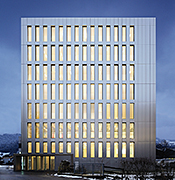 Connected urban lighting for Copenhagen: For the City of Copenhagen, Thorn developed a customised lantern (Thor) which is connected to the city’s central management system.