Dornbirn, Austria – The Christmas trees decorated with lovingly designed cards, in which the children from the Vorarlberg Children’s Village have written their wishes, have become an integral part of the pre-Christmas season at the Zumtobel Group by now. For the fourth consecutive year, numerous employees have participated in the initiative in support of the Vorarlberg Children’s Village and donated Christmas presents. This voluntary initiative was organised and carried out by the Zumtobel Group employees themselves.

Christmas trees put up specifically for this purpose at all Zumtobel Group locations in Dornbirn were decorated with the children’s wish lists and were the centre of attention in the last three weeks. Employees could take off a card with a child’s whish and put a wrapped gift underneath the tree in return.

The children’s fond wishes were very diverse and ranged from ten bars of chocolate, Playmobil figures, a colouring book with pencils to Bluetooth headphones and slippers.

“In total, we received 122 beautifully designed cards with the children’s wishes, most of which were taken within a few days. We launched this initiative four years ago and every single year I find it overwhelming to see how much joy it gives our colleagues to participate and how enthusiastic they are about making a Christmas wish come true for the children and young people,” says Ines Waltersdorfer from the team initiating the donation campaign.

All the parcels were handed over to the caregiver team of the Vorarlberg Children’s Village to ensure the gifts will be under the Christmas tree in time for Christmas Eve.

“When Santa is out and about, something special happens in everyday life. The glow of Christmas radiates into the advent season. The caring way in which the employees of the Zumtobel Group surprise the children is also very special. Writing a wish list, which then mysteriously disappears and later shows up under the tree as a very personal present, is a valuable gift for the children. We would like to thank ‘Santa’s helpers’ very much for making that possible,” say Verena Dörler and Sylvia Steinhauser of the Vorarlberg Children’s village. 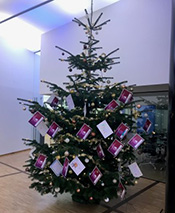 The cards with the children’s wishes on one of the Christmas trees.

Zumtobel Group employees together with the Management Board present the gifts to Verena Dörler (far right) and Sylvia Steinhauser (fourth from right) from the Vorarlberg Children's Village.
© Zumtobel Group AG 2020    -   ausgedruckt am:  Help Sitemap Impressum Privacy Statement Terms of use